This is the second guest post from Prof Peter Downton from the School of Architecture and Design at RMIT University, reflecting on the changes that have occurred during his long research career. In this post Peter talks about practices of writing prior to computers and the effects new technology was introduced. 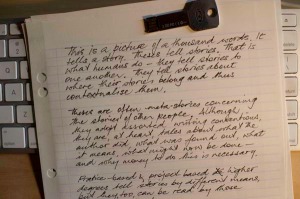 Although intellectually you may be aware of the fact, I can personally attest to the fact that computers are not necessary if you want to write.

I was one of the first kids on the block with a Mac when they were launched in 1984. Prior to the arrival of desktop computers I had managed to hand write several hundred thousand words: some research reports for local and international agencies; a research masters degree (two actually, for, to my supervisor’s horror, I threw the pile of pages of the first one in the bin and started again – by then I had worked with some of the people whose research I covered and my first effort seemed naive); my parts of a couple of co-authored books; some conference papers; a PhD; and a co-authored film script.

Nearly all of this material was typed by someone else for payment. Reflecting on changes in my writing processes, and those I have seen from supervising higher degree candidates since 1974 and conducting a research seminar since 1988, might reveal some things I hope are useful.

My handwriting was done on lined paper. I wrote on every second line to allow inserts and corrections, but if I really screwed up the same fate awaited the paper. It was portable: I wrote in cafes, on couches, and in (parked) cars. My entirely part time PhD was squeezed into the corners of an over-busy life, and frequently done at night or in lunchtimes. Combined with handwriting, this meant that the final draft was composed over twenty-two months. My thinking evolved over this period and the result is patchy. At least I could work in various places.

A similar level of portability was not recovered with computers until battery technology allowed lighter laptops. When reference material was required, the hand writer was more desk-bound than current computer users. Useful material such as outlines, notes to self and diagrammed arguments were kept in arch files along with the emerging text. This was bulky to cart about compared to the one-kilo laptop I currently use.

Writing by hand on paper promotes starting at the beginning. Perhaps this is the beginning of a section or chapter, rather than a whole document, but unless a great deal of cutting, re-ordering and reassembly is undertaken, writing in the same order as it is to be read makes sense. Computers irrevocably altered this for me. Now, I simply start. Often I conclude I commenced in the middle and a beginning is assembled prior to the initial start.

Always the text is provisional at both the level of words and with respect to the structure. Therefore I fiddle. Sometimes improvement results; sometimes it is simply change. The discipline of paper limited the fiddle factor. One person I supervised, only a few years ago, had the entrenched idea that a writer must start at the beginning and work through to the conclusion. He was unable to write at all because he had not decided where to begin. In an act of remarkable desperation he began and produced thirty-five thousand words in eleven weeks as a part time candidate. After mild polishing, this was final draft material.

I have supervised people who bang out drafts at remarkable speed, write a new second take and even a third draft prior to polishing it as a final text. I have had candidates who write in small units, possibly paragraphs, and slowly manipulate them into place in the PhD. Other candidates use whatever new mind mapping, idea assembling, or writing aid they have most recently discovered.

I know those who adore these tools. I see a lot of time go into mastering new ones. I am not necessarily convinced by the outcomes.What matters is the quality of the final product. What works for the individual seems personality-driven, so I am not prepared to support any one approach. Fooling with the writing toy, like tidying up, seems often to be a displacement activity – one more way of avoiding writing.

Post computers I have written books, chapters, and papers. My current mode of working is at odds with the paper-based writing. It is largely toy-free, reliant only on MS Word, although I had some flirtations with voice recognition a decade ago. (The inability to play music or work in cafes I regard as major drawbacks – however I have new voice recognition software on order.) Usually I write a paragraph or two that have popped into the brain. Often I produce an outline.

Nearly all these first thoughts are appallingly naïve and have to be wrestled into something presentable. Everything is in the one document: attempts at structure, outlines of arguments, passages of text, reminders and thoughts in red. Slowly it coalesces. The sensible bits constantly become longer; my first efforts at a whole always need further fleshing out. Re-reading alerts me to what I forgot or failed to convey well. While I feel writing a loose draft and editing it down is a waste of energy, I realise I may well type just as many words working in the opposite direction.

For much of my computer-based writing life I printed what I had produced and scribbled upon that; commenting, re-structuring and editing. This could be done in cafes or on trams. More recently, I take a small laptop to my local café. I also write at a desktop with two 24-inch screens. Pumping up the text size helps proofing. Other documents in electronic form can be piled up for display on the other screen. It parallels having books and papers scattered on my desk.

Many of the guides to writing theses seem to assume that writing is a hated difficulty. This may be true for those who resort to such guides. I have supervised many who enjoy, maybe even love, writing, or who at least (as I do) find the process of word production fairly compelling and hard to avoid.

Editors have long liked me as I have delivered the requisite words, with a low level of error, on or before the agreed date. In my view, this has had nothing at all to do with the mode or means I have employed to write. Mostly it derives from starting early enough. I learned early what a very long process writing can be even for those, like me, who are not alarmed by doing it. I see many people put themselves under pressure by leaving writing until later. I advocate fairly constant writing. A final text can then draw on this material. Be warned, however: it should be commenced much earlier than you intend to.

12 thoughts on “Writing now and then”