Lauren Gawne was a PhD student in the School of Languages and Linguistics at the University of Melbourne. She wrote this post while she was in ‘examination limbo’ has now received her examiners reports back and found out she has passed. When she isn’t working on the grammar of Yolmo and making bets about how long it will be until her examiners reports come back she can be found writing at Superlinguo. 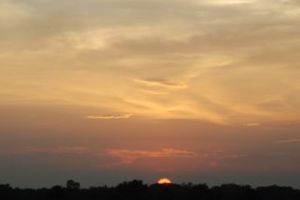 I submitted my thesis a while ago.

I’m not telling you this to make you jealous, just more as a point of fact. It was a lovely excuse for a Monday afternoon drink with friends and colleagues. I felt pretty happy about it, and rather proud of the small bundle of bound copies that signify four years of work.

For all that though, it was difficult to answer people when they asked me how I felt now that I was finished.

As a student under the Australian model, my thesis will now be examined externally, which means I live in limbo for at least 3-6 months. Knowing I still have revisions and another round of submission to go, it got me thinking about the many small milestones along the way to finishing a PhD, and I began to wonder – when are you really done with a PhD?

For me, the most personally satisfying completion milestone of the PhD so far was printing out the first full draft and handing it to my supervisor. This was the night I took my partner out for dinner and toasted the end of erratic work hours and being over-consumed by thesis thoughts. It wasn’t until that draft was printed that I realised I really would get it finished.

Between that momentous afternoon and handing in the examination copies, there were a flurry of smaller milestones as well. My final examination meeting involved my supervisor doing a little dance and shouting to colleagues down the hall way that we were finished (despite this sounding like evidence to the contrary, I have a great relationship with my supervisor).

Thanks to the enthusiasm of the friends in my lab, taking the thesis to the printers and collating those copies were also turned into small celebrations. Although I didn’t have to worry about hard deadlines, I wasn’t really prepared for how long all of this would take, or how many mini-milestones would pop up along the way, such as getting forms signed, a completion talk booked in, small printing disasters dealt with. In fact, by time the submission day rolled around I was actually just glad it was finally out of my hands for a while!

Now I’m in examination limbo, I can already see other milestones on the horizon. I had to give a completion talk, and then there’s receiving the examiners’ reports, making revisions, and submitting those final colour-bound copies, which will all be milestones, and of course there’s the official pomp of the graduation ceremony. In some other PhD systems there’s the viva, or defense, to mark off as well.

I wanted to share these experiences because there is very little discussion about how people feel about this process. It makes sense that most of the discussion is geared towards just getting your thesis finished, and thinking about realities like getting a job, but it’s worth taking some time to thinking about what you’re going to do (short term) post submission.

I was lucky I had teaching lined up in my department, and a conference to look forward to. It’s weird enough waking up without thinking about what I need to do on my thesis after 4 years of it, so I’m glad I had some structure to fill that.

So far, I’ve learned that no single component of this process feels like you’re really finished. It means that sometimes you might not feel as elated at a particular point as those around you might expect you to. Try figure out why that might be, and if you can maybe try and find someone who has gone through the process to chat with about it.

You’ll also find that different milestones are worth celebrating with different people. Submitting the examination copies was something that I wanted to share with colleague who have been through the process with me, but the graduation ceremony is something that my family is already looking forward to.

The other thing that I’ve learned is that, since there’s no single milestone, sometimes the safest thing to do is celebrate them all!

39 thoughts on “When are you really finished with a PhD?”