When you do a PhD, life doesn’t just … stop. Most of us start a PhD later in life (the average age on entry is 32), with family and financial responsibilities. Everyone has a role when a crisis hits – supervisors, administrators, family and friends. How can we support each other better? This post is by Phillipa Bellemore who is a PhD student in Sociology at Macquarie University in Sydney. Her PhD explores the relationship between refugees and receiving communities in Australia. Phillipa’s blog can be found here http://refugeementoring.com/ 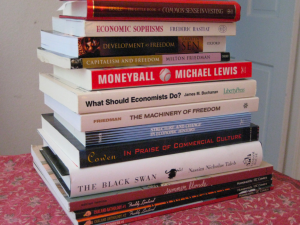 My complicated relationship with libraries dates to my childhood. I love books, but sometimes returned them late feeling a naughty child under the librarian’s stern gaze. Last December, when I tried to borrow books, I realised a freeze was placed on my library card. Internally I groaned. At the library desk, the librarian suggested checking my online library record.

I am outwardly an organised student, but library books were last the last thing on my mind as I struggled to appear normal and in control.

During a three to five year PhD it is probable that you or a loved one will experience a crisis. In 2016 my daughter called from Brisbane to say that she was sick in hospital. I flew from Sydney for a few days that morphed into a month, while tests and a diagnosis of Stage 4 lymphatic cancer was made, followed by operations and chemotherapy.

I turned back into ‘Mum’ again, and my PhD was shelved. While in Brisbane a library email notified me of an overdue library book and fine. It took several emails to clarify that I was stuck in Brisbane and couldn’t return the book. Despite this, I received an email declaring my leave without pay could not be processed until the library fine was paid. I was unable to resolve my leave without paying a fine which I felt was unwarranted. Eventually with help from my supervisors and HDR manager we sorted it out and no fine was applied and my leave was approved.

My daughter and her partner returned to Sydney and lived with us while her aggressive treatment continued for four more months. It was an awful year and hard to make sense of a healthy young woman becoming a cancer patient. In November, I attended a Courage and Renewal retreat to ready myself for the coming year of interstate fieldwork. Over a retreat lunch I reflected on the hospital treatment and how confronting the experience had been. A fellow retreater was a cancer counsellor. She gently asked “When is it going to be your turn to fall apart?”.

I thought I’d handled the year well. Staring at the library fine the following month I realised my unconscious had other plans. After returning the books, I visited the library to mitigate the situation. The desk librarian seemed sympathetic and he twirled his computer around suggesting I email the library. Fighting an urge to procrastinate, I emailed explaining what had happened, that I knew I was in the wrong and asking if the library would waive the fines.

Back at university, once I started speaking about my daughter’s illness, other students shared their adversities. I was amazed to hear stories from PhD students: mental health issues, sickness, hidden disabilities, sick children, of parents, friends and siblings who died during their PhD, relationship breakdowns and how these events had impacted their ability to concentrate, research and write.

We are scholars AND we have a life that claims our attention outside the academy. How to support a PhD student in need?

Small kindnesses count. A hug, a card, a supportive email, a bunch of flowers, a short telephone call, sharing a cup of tea – all make tough times less alone. My HDR Mentor friends were there to listen and I attended mentor events such as dinners and meetings, which were comforting. Many staff sent supportive emails. My PhD friends kept in touch via email and phone. It was a lifeline in a dark time.

When I returned after five month’s leave sitting on my desk was a “care package” my PhD buddies had gathered, with a candle, biscuits, chocolates, teas and even porridge. I felt wrapped with care.

When a PhD colleague looks sad, “disappears”, dresses with less care, behaves out of character, ask “how are you travelling?”. Be prepared to hear uncomfortable things – don’t give advice unless asked. Discuss what things might help them and that might include seeing a counsellor.

In my case, I hated people reassuring me my daughter was “lucky”, because she would be cured of cancer. Their comments negated what she had endured and what we had witnessed. The impact of adverse events can linger. I still get teary when I see someone with cancer who has no hair, or view photographs from my daughter’s time in hospital. It was hard returning to PhD routines and particularly fieldwork, as mine involves interviewing refugees, whose stories can be harrowing.

I call on HDR administrators to have courage to apply compassionate rules and ditch the red tape. The last thing I felt like doing from a hospital bedside was emailing the library, filling in leave forms and providing evidence from busy doctors that the cancer was real. Who makes this kind of story up? I dreaded the forms. Instead of a form, my daughter’s university, trusted that she was telling the truth, did not ask for evidence, wished her well and said they looked forward to her commencing her masters in 2017 instead of 2016.

When I emailed the library asking for my fines to be waived I had no idea what to expect. Afterwards, over lunch with a PhD friend, we discussed how incidents like the library fine can tip us into despair. Then my phone rang, a friendly voice, a library manager – he had waived the fines. I was touched that he called rather than dispatching an impersonal email. What a difference speaking to a person and knowing their name. The next day he emailed saying I was free to borrow again, and wishing me a lovely end of year break with my family.

An act of kindness, inviting me to reimagine my relationship with librarians. The library manager saw beyond 23 overdue books, and acknowledged a person in need, rather than a student to be punished. I’ll be forever grateful.

Postscript: Phillipa’s daughter has now recovered from cancer and is studying on a master’s program at an American university. Phillipa is returning books on time and completes her thesis this year. She and her family are living their best lives.

Thanks for telling your story Phillipa – I’m sure it resonated with others who have gone through similar situations. How about you? Have you faced a crisis which impacted your ability to study? what helped you through?