A couple of weeks ago I visited Sydney University to give a keynote address during research week. During morning tea I got chatting to the director of the Graduate Studies Office, Simon French, who invited me over to his office to continue the conversation before I left for Melbourne. Simon told me to find my way to the Quad on the main campus and then call him, as his office was hard to find. 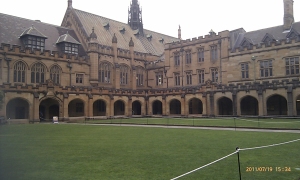 The University of Sydney Quad is arguably the most magnificent of the ‘Oxbridge’ style pieces of architecture in Australia, as you can see in this photo. Simon is lucky enough to have an office tucked away in the corner of this immense structure. It must be like going to work with Harry Potter (as you have probably guess, I was quite jealous).

It was a pleasure to nerd out with Simon for an hour or so. He is one of the few people I’ve met who is as fascinated by the complexity of the issues in research education as I am. Most of our conversation was about the dissatisfaction research students feel with the research culture at their institutions. It seems research students are happy with the quality of the education they are getting, and most like their supervisors, but many are unhappy about universities as places to be.

On the face of it, RMIT University seems to be in a completely different league to the University of Sydney. Our campus looks more like a collection of funky office blocks than an outpost of Mother England. And – if the buildings are anything to judge by – we have a lot less research money to play with. I thought University of Sydney students would be a pretty happy lot, given their obvious material advantages, but Simon told me otherwise. As it turns out, University of Sydney are just as dissatisfied with the research culture of their university as their RMIT counterparts.

Universities are always working on the ‘research culture’ problem, but all the strategies seem to fail. If students complain about not having space on campus we give them desks, which they rarely use. If students complain about needing more intellectual engagement, we provide them with workshops – which are poorly attended. No matter what we do, we just can’t make them happy.

‘Culture’ is a difficult concept to define of course; it is more than the physical spaces which we inhabit or the people who surround us. I wondered aloud if the problem of research student unhappiness is that university life just fails to live up to our expectations. Simon agreed and then said something both wise and funny:

“I tell people that the University is like a bad boyfriend. Sooner or later it is going to break your heart”

I laughed because it was true – at least of myself. For years I carried around a Brideshead Revisited inspired fantasy where professors sat around drinking port with their students in book lined rooms talking about the meaning of life. My undergraduate experience, although grueling, did nothing to dispel this image. My lecturers  were all so clever and interesting; I wanted to BE them and live the life of the mind. I assumed The University was a charmed place to work; a happy community of scholars living in an intellectual meritocracy.

I was in love with The University, but it broke my heart when I first applied for a lecturer’s job, some four years after I started working as a casual tutor. I was shocked when I was passed over in favour of the research assistant of an influential professor. To my mind I was the better teacher, which made this decision deeply unfair. I said as much to another staff member, who gave me a little talk about the difference between nepotism and patronage and the importance of cultivating Contacts.

It took me awhile to appreciate the value of this cold blooded advice. I went on to be rejected four more times before I had to face up to the sad truth. Just like a bad boyfriend, the university was happy to go on dates with me, but was not willing to commit to a long term relationship. I was just not sexy or interesting enough – I didn’t have a PhD or a list of publications the length of my arm. It’s an unhappy truth that a research heavy CV is the tight leather trousers of the university employment dance. Teaching ability is like a good personality – you are grateful for it after you have known the person for awhile, but it wont make you take them home from the disco.

Simon claimed that some people lead a charmed life and don’t get their heart broken until they fail to get promoted into the professoriate, or get retrenched out of existence because someone decides the university isn’t teaching medieval history anymore. Some unhappy students get their hearts broken in undergraduate courses and never complete; other students are broken by a research supervisor who makes their life a living hell. Simon went on to talk about bouncing back after The University has become your bad boyfriend. It’s true that people do react in different ways to being unlucky in love. Some will swear off having a relationship forever and go out to get paid more in the private sector; some stay, but are permanently bitter.

Others, like myself, realise they were being unrealistic and decide to continue to love The University while being aware of its faults. The happy conclusion to my story is that I decided to put on the tight leather trousers and get  PhD, while continuing to make the most of any opportunity that came my way. Now I have a wonderful job that, amongst other things, pays me to write this blog and think about stuff for a living. The best revenge, as they say, is to have a good life.

As I left Simon’s office that night, and walked with him through the soft purple twilight of the Quad, the bell tower started chiming the hour. It was the perfect moment – a picturesque stroll after a happy hour of talking about meaning of life stuff. For just a moment I thought I had got a glimpse of The University Life I have always longed for. I suspect that, in the contemporary academy, a glimpse now and then is all you are likely to get. For me just a glimpse is enough to keep the love alive – what about you?

What is your dark side?

56 thoughts on “Is the University a bad boyfriend?”