Is academia too Fast? In 2011, I wrote a piece called Slow academia in which I mused:

“If you think about it, a thesis or dissertation is the epitome of Slow. Even if you finish in speedy fashion you are unlikely to turn one out in less than three years. Over those years you have to do a lot of different things: talk to people, collect data, record observations or make stuff. At the same time you must absorb information and engage with other people’s ideas. In a way, doing a thesis is like a long, slow conversation with these ideas and things, during which you try to tease out what ‘knowledge claims’ you can make. The outcome of this ‘conversation’ is recorded in writing – a thesis or dissertation text, which is examined by others who decide if the quality of the conversation is good enough for you to take on the title of Doctor.”

Others have been attracted by the idea of Slow and taken the idea much further than me. Last year saw the publication of ‘The Slow Professor’ by Maggie Berg and Barbara Seeber. I read it with interest, but didn’t get around to writing a review before Dr Alison Edwards suggestested this post, which was a lovely extended mediation on the idea of Slow.

Alison Edwards (PhD Cantab) is based in Amsterdam, where she works as a writer, translator, editor and independent scholar. Her latest research focuses on English in continental Europe and its role in local identity construction. She is the author of English in the Netherlands: Functions, Forms and Attitudes (John Benjamins 2016). She also blogs at www.theroguelinguist.com. Follow her on Facebook or Twitter. 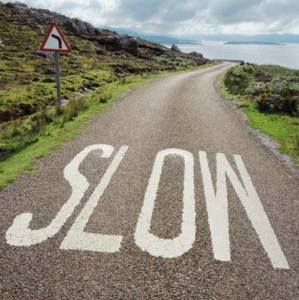 During my PhD at Cambridge, I developed the nervous habit of tying knots in my hair. Sitting in the library, I’d twist clumps of it around and around my fingers into a tight, fist-sized tangle. The procedure was very satisfying – until the knot wouldn’t undo and I’d have to cut it out. At the hairdresser’s, I’d say I’d gone to a fancy-dress party with a beehive up-do and couldn’t brush it out; that felt less freakish than admitting to wilful self-mutilation.

I wasn’t worried, though, as all my friends had their thing. One developed such a violent eye twitch she was sent for brain scans in case it was a tumour. The real problem was stress. Day in, day out, you had to excel. Write another paper, go to yet another conference, run this workshop, follow that training, say yes to every opportunity that comes your way. You were constantly asking yourself: am I good enough? Am I doing enough?

Worse, you were (or felt as though you were) surrounded by people whose first-year thesis work led to meetings with Bill Gates and Barack Obama. And these were the people you’d be competing with for academic jobs – mere mortals were never going to get a look in.

One of the perks of Cambridge life is that ‘bedders’ came into your room every day to empty your bin, but rumour had it the real aim was to check you hadn’t killed yourself.

The pressures of academic life are by no means exclusive to top-notch institutions, nor to the PhD experience. Far from it. And so, almost inevitably, people have begun calling for a “Slow Academia”. Something akin to its cousins in the Slow Movement, like Slow Food or Slow Travel or Slow Parenting.

But recently, critics have come out of the woodwork. Slow academia represents privilege, they say:  it’s for those who can afford it, who have already reached the scholarly summit, and it comes at a cost to those below them on the academic food chain.

The ethics of slow

Slow Academia is a response to the university as anxiety machine. To a creeping, aggressive brand of academic capitalism, characterised by rampant managerialism and an insidious audit culture.

Proponents of Slow Scholarship, Slow Science and the Slow University believe resisting Neoliberal U means embracing the ethics of slow.

Letting ideas ripen and brewing papers gradually, rather than submitting them half-baked. Striving for quality, not quantity. Connecting with students and spending time on well-crafted, inspiring lectures. Taking care of ourselves and others. Making time to think, digest, reflect (“Bear with us, while we think”, write the authors of the Slow Science Manifesto).

The key is, according to the authors of The Slow Professor, to “remind ourselves of why we went into teaching, and what it is we love about scholarship”.

It all sounds lovely, but not everyone is impressed. As one critic of The Slow Professor writes,

I have never seen such a grotesque example of tenured faculty privilege […] Poor darlings […] Let’s hope we don’t see the “Slow Nurse”, or “Slow Doctor” movements picking up amongst the professions. Why should academia bathe in this self-indulgence?

At issue is that not everyone has the luxury of taking 17 years to write a book. Not everyone can labour over the composition of “slogs” (slow blogs) and “sleets” (slow tweets). Moreover, some see avoiding social media (“We are scientists. We don’t blog. We don’t twitter. We take our time”) as an abdication of role of public intellectual.

Not everyone can afford to resist by publishing in places that don’t count when it comes to metrics. Not everyone feels they can risk treating research targets as a pirate code (“more what you’d call guidelines than actual rules”). As Liz Morrish points out, “the slow, careful writer who wishes to do scrupulous and yes, pleasurable work” faces being subjected to “capability procedures”. And of course, not everyone can afford to work as a part time or self-funded academic (as – full disclosure – I do).

On the backs of others

One important argument runs that those who embrace slow do so on the backs of others. Mark Carrigan and Filip Vostal write

those already at the summit of the academic career structure [… ] enjoy a security being systematically denied to ever greater swathes of their younger colleagues. […] “slow professorship” only makes sense when such decelerating professors can take it for granted that junior associates will accelerate to pick up the slack.

In this sense, Slow Academia can be seen as conservative and exclusionary; see for example this thoughtful piece by Heather Mendick:

Slow academia is becoming a conservative movement – harking back to a ‘golden age’ of higher education that never was.

The past privileged space of academia was premised on the exclusion of others […] Spending time in the ethereal domains of the Slow university, requires the unpaid and unacknowledged material labour of others, be they cooking and cleaning for us, caring for our children, or otherwise servicing our needs. We need to interrogate slow, by asking: Who can go slow?  And, what difference does it make which university you’re at, which contract you’re on and what other responsibilities you have?

We could go further still and say that slow risks acquiring the stink of self-righteousness. Not everyone is equally well equipped to fight the culture of fear. Not everyone has the wherewithal to stand up to managerial bullying. Simply surviving rather than politicking shouldn’t become a badge of shame.

All academia is privilege

Slow Academia is privilege, but then no one is denying that. As Agnes Bosanquet at The Slow Academic points out, “Many tenured and tenure-track academics have been casuals themselves, and I think they are keenly aware of their privilege.”

It is privilege in the manner of all slow movements. Take Slow Food: “something to be carefully prepared, with fresh ingredients, local when possible, and enjoyed leisurely over conversation around a table with friends and family.” This is privilege itself, but that doesn’t make it any less desirable for many of us.

And at the end of the day, isn’t academia already privilege, even for those at the bottom of the university food chain? For starters, the luxury of being a knowledge worker at all means you were born in a time and place where you could get an education. Nobody becomes even an adjunct without the right degree, probably several of them.

I grew up not certain university was on the cards, however desperately I wanted it. To this day I thank my lucky stars I was born in a country (Australia) that made it possible through student loans. After undergrad I worked for several years before I could pay for a master (part time, alongside work).

Then it took a few more years of working two jobs and saving, working and saving, to afford the PhD. I was lucky to get a scholarship that covered my fees, and continued working throughout; always on the sly because Cambridge doesn’t condone dividing one’s precious attention (unless of course it’s by teaching for them).

But however hard the slog, however many sleepless nights and anxious days, however many nervous knots I managed to tie my hair, I’m aware that even the chance to pursue that path was a privilege. The coal mine was my grandfather’s only option. I get to read and think and discuss and write, however hurriedly at times. Yes, Slow Academia is a privilege. But so is all academia.

Thanks for this thoughtful piece Alison – what do you think? Are you embracing your privilege and ‘Slow’, or do you think about academia differently? Love to hear your thoughts in the comments!

22 thoughts on “Slow Academia is for the privileged – but then, isn’t all academia?”

What do you think? Cancel reply